The Story of Carolyn Marie 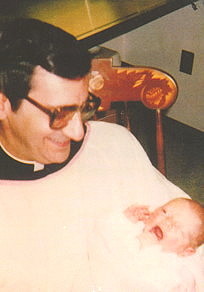 On the evening of November 4, 1991, Rev. Robert Rousseau, pastor of St. John the Evangelist Church in Watertown, Connecticut, was leaving a meeting in the church hall. As he walked into the dark parking lot he decided to return inside and turn on the outside lights for the women who would be leaving their meeting shortly. He walked back through the dark church entryway and flipped the switch for the parking lot lights. As he walked past the entryway for the third time Father recalls, “I was just about to leave when I heard a cry.” Startled, he looked down and saw a shaft of light hitting a box in the corner, and he spotted a little foot inside. “I didn’t know if it was a doll or a baby at first. There was just that cry in the darkness. I bent over and saw it really was a baby, wrapped in a blue T-shirt.” Fr. Rousseau recalls, “It was as if God poked her and said, ‘Let yourself be known.’ She wasn’t crying. She just let out that one cry that got my attention. If I hadn’t gone in to turn on the lights, I wouldn’t have found her. And if she hadn’t cried out, I would have been out the door.”

Fr. Rousseau had one of the women at the meeting downstairs, whom he knew was a nurse, come upstairs to help while someone called 911. The baby was no more than three hours old. She was taken to Waterbury Hospital by the emergency team.

Fr. Rousseau suggested they give the foundling child a name. Because November 4 is the feast of St. Charles Borromeo, he called her Carolyn and he gave her the middle name Marie for our Blessed Mother. Father could scarcely imagine how afraid and alone the mother must have felt, but how courageous she was to choose life for her child and place her in a safe surrounding where she would be found.

Carolyn Marie was adopted confidentially but her story did not end there. With the prayers and hard work of a core group of parishioners, one year later, Carolyn’s Place, Inc. opened its doors, in order that “No woman should face pregnancy alone.”

Mary, mother of Jesus and our mother, we thank you for your faithfulness to God and your openness to life. Your willingness to trust that God would lead you through whatever circumstance you found yourself in is a wonderful example for us.  We ask you to intercede for all who are involved in serving women and children and men through Carolyn’s Place Pregnancy Care Center.  We want to discover what God is asking of us in our daily activities so that we may cooperate in bringing about His will on earth as it is in heaven.  You said ‘yes’ to life and Jesus was conceived and born and accomplished salvation for all who would believe.  Pray for us so that we may continue to say ‘yes’ to God’s will, and that we may be able to help all whom we serve to also say ‘yes’ to life and in so doing accomplish Your will.  We make this prayer through Jesus Christ our merciful Lord and Savior.  Amen